To participate in the ongoing celebration of vibrant community life globally, through nourishing shared experiences of wellness locally.

The Alpine Valley Wellness Center, PC is dedicated to the creation of transformative experiences of health within the Wenatchee community by providing individualized, integrated medical services based on the principles of effectiveness, education, and ecology.

Ok, but what do they mean?

We want to assure you that our vision statement and mission statement are not cookie-cutter proclamations tossed off by a piece of software. We have put a great deal of thought and effort into creating these statements and we are proud of them. They mean something to us because they touch on the reason we exist and what you can expect from us. Thank you for giving us an opportunity to briefly say a bit more about them.

As you might guess, a vision statement differs significantly from a mission statement. It has been said that an organization will never be greater than the vision that guides it. In our understanding, a vision is a conceptualization of a compelling future that you are drawn to create. A vision statement speaks to that.

As we considered what type of compelling future was worthy of our center, it became clear that we wanted to build a bridge between what was happening in our local community with health care and wellness and what was happening globally. We felt that by providing health care that integrates prevention and wellness with evidence-base medical interventions, we could nourish, “shared experiences of wellness locally.” As our patients became healthier, our community would become healthier. And as our community became healthier it would contribute to the world becoming healthier. What could be more of a reason to celebrate than that? 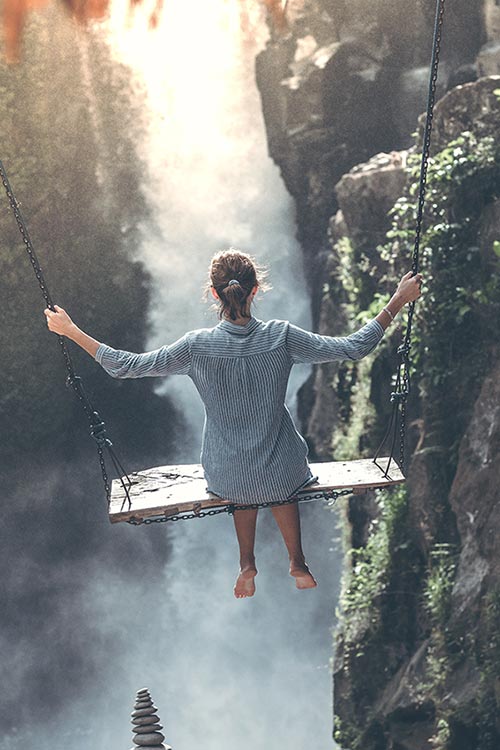 A mission statement, on the other hand, is more like a blueprint for an organization’s work. It answers the question, “Why does our company exist?” It speaks to what we value and what guides us in making decisions.

There are a number of important concepts in our mission statement. The first has to do with “transformative experiences of health.” Have you heard the expression, “The more things change, the more they stay the same?” People often say that they wish to change, but changing something does not necessarily make things better. Most people change their socks every day but that in itself does not lead to an evolution in their understanding of fashion or in the health of their feet.

When people say they want change, what they often mean is that they want transformation – an upleveling of their life in ways that create new possibilities and opportunities. Our mission is to create a context in which transformation in the area of health can happen for you. How can that occur? In large part, through care based on listening – listening to your needs and priorities, listening for your strengths, listening to understand your challenges, listening to what other medical personnel have done previously. And, most importantly, helping you to listen to your own inner wisdom that you may not have appreciated before.

Listening naturally evolves into doing, which leads to the second important part of our mission statement: “effectiveness, education, and ecology”. We call these the “3 E’s.”

In general use, effectiveness is the extent to which something actually works. In medicine, it refers to the ability of a treatment or intervention to affect a positive change.

In medical circles, the word “efficacy” is often confused with effectiveness, so we should clarify that the two words do not mean the same thing. In medicine, efficacy is defined as the extent to which an intervention or treatment produces a beneficial result under ideal conditions, such as a randomized clinical trial. This means that is has a very high degree of authority, but only in limited settings.

The current trend in conventional medicine is to venerate “evidence-based medicine” (and thus efficacy) as the most effective form of medicine. Certainly having medical interventions based on carefully evaluated evidence is a positive development from the system that gave us Prempro, Vioxx, and Fen-Phen. But it is not without its problems. For example, “evidence-based medicine” makes a number of assumptions such that the ultimate medical truth can be derived from Randomized Controlled Trials (RCTs) and that evidence to support best practices should be arranged hierarchically with RCTs at the top.

Here is the first problem: these assumptions themselves do not arise from any type of RCT or scientific evaluation. What then makes them superior to other assumptions on which we could base medical approaches?

Here is the second problem: information that we can extract from RCTs or clinical research tells us nothing about important aspects of medicine, such as professional and patient values, how to best organize and apply medical resources, and the creation and application of moral and ethical principles. RCTs tell us a great deal about pathology and efficacy, but not very much about wellness and attaining optimal health.

Here is the third problem: one of the biggest deficiencies with “evidence-based medicine” is that information derived from RCTs is not directly applicable to individual patients, nor does it answer the primary clinical concern of any physician – “What is best for this patient sitting right in front of me?” Because evidence within this system is organized with RCTs at the top, knowledge resources that can answer that question, such as expert opinion, common sense, hundreds of years of historical usage, and clinical experience, are devalued.

Of course, all of this assumes that the RCTs are done correctly, are not suppressed by large corporations, are not corrupted by political and financial interests, and are correctly interpreted. Some critics have argued that more than 50% of medical research studies are invalid due to bias, statistical errors, lack of internal validity, or lack of external validity. Certainly the estimated $19 billion spent by the pharmaceutical industry each year for marketing to doctors has an impact on this area.

To do effective medicine, we believe physicians need to draw upon as many appropriate resources as possible. This is not to say we do not use evidence-based interventions, because we do and they are valuable. But, as we discussed above, we are also aware of the limits of “evidence-based medicine.” That is why effectiveness, not efficacy, is one of our “3E’s”.

Attempting to define education illustrates a critical point that is fundamental to both communication and medicine: it is dangerous to assume that simply because people use a word, we all perceive the word in the same way. This is because the meaning we assign to a word is based on beliefs or sets of perceptions, not on objective facts. One of the tenets of postmodern thought is that there is no “absolute reality” because reality is a creation of human consciousness. While this is a controversial position, it is certainly true that human language is often highly personal and we should not assume that we understand what someone is saying because they are using a word we recognize.

It is for this reason that there is no universally accepted definition for education. Some definitions stress formal instruction, some stress integration of knowledge, while others stress transmission of culture from generation to generation. Fortunately, our task is easier because we are going to define education in the specific context of our wellness center. For our purposes, we will define education as the sharing of information, experiences, or knowledge that assists an individual in improving their quality of life and supports experiences of wellness within their personal life. The first part of the definition speaks to the very core of what a wellness center does – move individuals in the direction of their own understanding of optimal health or wellness. The second part addresses the desire to educate people about how to sustain this in their own lives. It is like the wonderful old adage, “Give a man a boil and he’ll just get sore. Teach a man to boil and he’ll be able to make his own tea.”

The term “ecology” brings up a range of wonderful images from nature: beautiful mountain lakes, waterfalls surrounded by vibrant plants, herds of animals running across verdant plains. In its most general sense, ecology is the study of the relationships between living things and their environment, and it is this focus on relationships that is central to the way we incorporate this principle into our center. The practice of natural medicine is rooted in respect and appreciation for the earth and the beings that inhabit it. Therefore, it is essential that our center reflect those values that align with a highly-developed sense of ecology – values such as sustainability, stewardship, and environmental sensitivity.

As you are initially introduced to the principles of ecology, they will first make sense to you in specific situations: the decision to eat in a specific way, for example, or the choice of how you use limited resources such as water. As you become more familiar with them, you will find that they have a much wider field of application. We encourage you to educate yourself as much as possible about these important principles.

Outside of issues such as technical competence and organizational ethics, much of what distinguishes health care providers from one another is their philosophy and professional orientation. We hope that this discussion has helped you to understand ours. In its desire to respect the ecological and genetic heritage of the human body, natural medicine seeks first to listen to what is required in the healing process and then to provide this in the least invasive and most effective way possible. We welcome the challenge of integrating this time honored tradition of medicine into the modern health care delivery system in the service of our patients.

Stay up to date on news and events

Newsletter Sign-Up
We value your privacy. Your e-mail address will not be given/sold to third parties. You can leave the list at any time. Removal instructions are included in each message.

The posted material on this website is for informational and educational purposes only. It is not intended to replace supervision, evaluation, or treatment by a qualified, licensed, medical practitioner. Alpine Valley Wellness Center disclaims any liability arising directly or indirectly from the use of this information.